Taking our resort as a starting point you will be able to visit many interesting places in a radius of 100 km.

Historical sites
Pangani Only 10 kms away from the resort, and has also nice beaches nearby. Each side of the town is separated by the river Pangani but there is a ferry to connect the two. An unforgettable experience is sailing the river on ancient canoes.

Tanga is a town 42 km north to Bahari Pori, its  name is the same of the most northerly seaport city of Tanzania, and the surrounding Tanga Region. It is the Regional Headquarters of the region.With a population of 243,580 in 2002, is one of the largest cities in the country. Tanga was chosen in 1889 as a military post of German East Africa, and became a district office in 1891. The local economy was based on sisal, which had been brought to the colony several years earlier, and population in the area grew rapidly. The name Tanga comes from the word for farm or cultivated land in several of the local languages Tanga gave its name to Tanganyika, literally meaning “Sisal Farm”, the territory which in 1964 joined with the island of Zanzibar to form the modern nation of Tanzania.

The Amani Natural Reserve is one of the parks in Tanzania with the highest degree of biodiversity: more than 10,000 hectares of forest, with 460 plant species, 350 bird species and many endemic species such as the three horned Jackson chameleon and the African Violet. The park offers good hiking paths for guided tours and a visitor centre with a small museum exhibiting seeds, photographs and providing refreshments.

Saadani National Park is located 2 hours car drive from Pangani. Saadani is the only coastal natural reserve in Tanzania: a perfect combination of sea and savannah. The park is easy to reach: the entrance, in fact, is right on the road to Dar es Salaam and can be visited in a day or two. It is populated by elephants, giraffes, lions, hyenas, leopards, buffaloes, warthogs, antelopes, wildebeest and monkeys. The Wami River, which passes through Saadani and flows into the Indian Ocean, is the home of a large population of hippos, crocodiles, flamingos and many species of birds.

BEACHES
The closest beach to the resort lies 6 km south on the direction towards Pangani. Around Pangani there are a number of beautiful quiet beaches. One is close to Pangani town and the other one is at Ushongo, south of the town Pangani, offering a tongue of white sand lined with coconut palms.

Maziwe Island is only 10 km away from Pangani. It is a sandy island completely surrounded by reefs. Maziwe is now a protected National Marine Park, which at high tide, becomes completely submerged. Its peculiarity is the fact that Maziwe is a real paradise for snorkelers and divers: reef is beautiful and intact, with a myriad of corals, 200 species of fish and many different types of sponges and seaweed. It is also the permanent residence of many animal species and the nesting location of the famous green turtle.

See the pictures below taken at Maziwe Island: 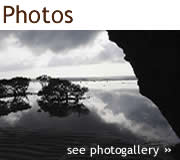